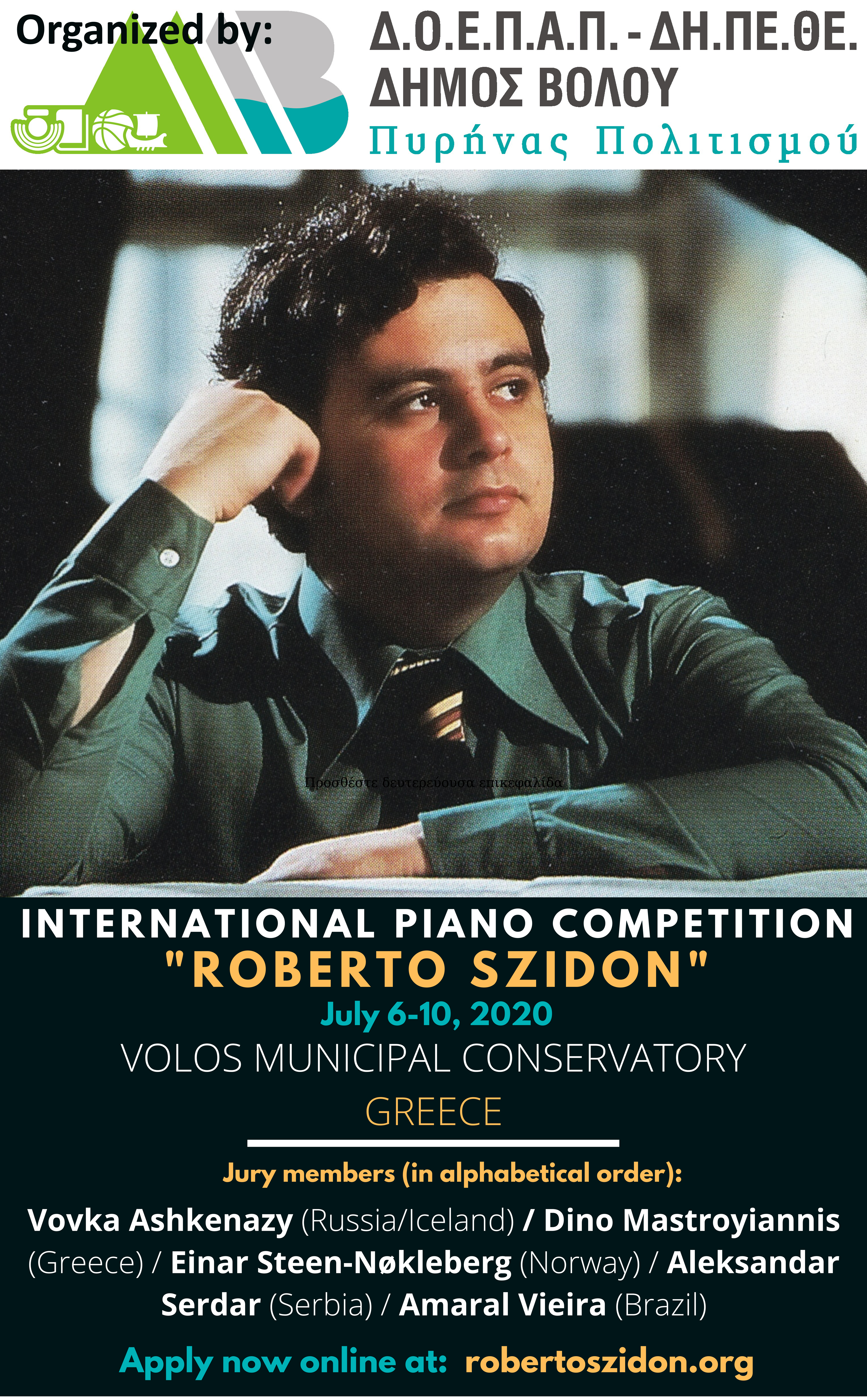 The Volos Municipal Conservatory – Greece is proud to announce the International Piano Competition “Roberto Szidon” to be held from July 6-10,  2020 in Volos, Greece. This is a remarkable musical event to discover and support young talents of classical music. Organized in the year of 2020, the Competition is dedicated to the memory of one of the greatest pianists of the 20th century, the legendary Brazilian virtuoso Roberto Szidon, who died in Germany on December 21st 2011. The organizers hope that the Competition will help bring classical music closer to Greek and international music lovers and strengthen the exchange between young talented pianists from all over the world.

Roberto Szidon (21 September 1941 – 21 December 2011) was one of Brazil’s greatest pianists. Recordings like the complete Hungarian Rhapsodies and the Spanish Rhapsody of Liszt, the Sonatas of Scriabin, followed by the Violin & Piano Sonatas of Bartók (with Jenny Abel), which was named “one of the 33 great recordings of the century” in Germany, have made him famous throughout the world. He completed his studies with Ilona Kabos and Claudio Arrau. At the same time he embarked on an international career and an extensive activity as a recording artist. Since 1964 he has recorded almost 200 works for a large variety of firms like Abril Cultural, EMI Angel, Deutsche Grammophon, Deutsche Harmonia Mundi and Kuarup Discos, to mention a few. He recorded a prize-winning LP in 1965 of Heitor Villa-Lobos’s Rudepoêma and other works, as well as works of other Brazilian composers like Ernesto Nazareth, Francisco Mignone, Alberto Nepomuceno, Radamés Gnattali, Marlos Nobre and Chiquinha Gonzaga. Many of his records have been bestsellers and in 1966 he was awarded the “Citão de São Sebastião de Rio de Janeiro” prize for the best classical music recording, and in 1977 the German Record Critics’ Prize in the chamber music section. Forty-one works by twenty-five Austrian, Brazilian, American, French, Greek, Guatemalan, Norwegian and German composers have been dedicated to him. Roberto Szidon was a pianist who was fascinated by his passionate temperament and his perfect technical mastery of his instrument.

The Greek concert pianist Dino Mastroyiannis, who was a student and close friend of the legendary pianist, is the ispirer of this idea and the President of the Competition.